Tuesday, November 29 | 2022
top posts
Podcast with Sirius Smartshops owner Guy Boels
Dozens of kilos of hash wash up on Israeli beaches
Study: oral medicinal cannabis safe and effective
Irish Labor Party calls for decriminalization of…
Climate change: hemp can be very important in the…
The Netherlands is not allowed to deport a Russian medicinal cannabis user
Medicinal cannabis producer Bedrocan gives a look behind the scenes
Increasing the dose of cbd does not change anything...
Cannabis plant in the center of World Horti Center
Patients receive cannabis medication for years when participating in...
Home Cannabis An illegal laboratory is going to test weed and calls on everyone: "Come along, because you want to know what you smoke"
CannabisNews

An illegal laboratory is going to test weed and calls on everyone: "Come along, because you want to know what you smoke" 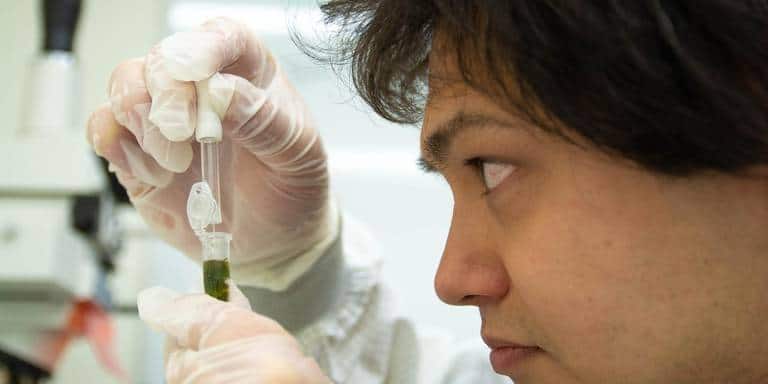 Products in the supermarket have a label, but whoever buys a bag of weed has no idea what is in it. Rinus Beintema thinks it is strange to open the Highlab (illegally): a laboratory for weed tests that everyone can go to.

Coffee shop holders are enthusiastic but also reluctant. The only weed variant that can be tested in the Netherlands is the medicinal cannabis that the state monitors: that of Bedrocan in Veendam. Testing for recreational use is prohibited. Yet Beintema starts with it. From 1 January everyone can go to the Highlab in Leeuwarden for tests: from users to coffee shop holders.

From medicinal to recreational

Beintema is well-known in the cannabis world. De Leeuwarder set up the Social Club earlier, with branches in Groningen and Leeuwarden, among others. The club provides medicinal cannabis oil to a small 15.000 member. That too is illegal, but so far the club has not been blocked. This may have to do with the many customers who say they benefit from it; among others people with MS, cancer and spasms, use the weed oil for pain relief.

All cannabis oil that is provided is first checked in the Highlab, says Beintema. “Many types of cannabis contain bugs or toxins to combat those bugs. You don't want to get that in. ” And so, according to him, it is high time to also take a closer look at cannabis for recreational use.

The National Institute for Public Health and the Environment (RIVM) conducted research to weed. And indeed: pesticides were found in 23 of the 25 tested species. RIVM did not raise the alarm. The amount would be so low that there are no risks for the user, just like with fruit and vegetables. “But”, says Ferry de Boer of the Association of Cannabis Retailers: “We smoke weed. And what happens when you burn those pesticides? We do not know that."

Beintema also has that concern. “We often encounter chlorides. You really don't want to smoke that. '' He shows a microscope photo in the lab. There is a red monster in the middle of the green weed. “A spider mite. Will crackle if you smoke it. But I'm especially concerned about the increase in resources that growers are using to prevent these types of bugs.

That established KRO focal point earlier already. The makers of a TV broadcast think that weed pesticides are more common because small organic growers are pushed out of the market by large organized cannabis cultivation.

'The interest of the smoker must come first'

Own responsibility, some will say. Anyone who smokes weed takes a risk. But that is not accepted at Hein Schafrat. He is a coffee shop owner in Haarlem and chairman of the Dutch Cannabis Companies Platform. “12,8 percent of the Dutch just use that stuff. Their interest must come first. It has been laid down for all kinds of industries that nothing may be sold without a label, so you cannot justify that this is allowed with weed? "

If it is up to Beintema, everyone will come to him for testing. Many coffee shop owners are eager to do that. Some do, while at risk. "I want to know what I'm selling," says a Utrecht coffee shop owner who has his weed tested at the Highlab. He wants to remain anonymous. “I would like to let everyone know that I sell tested weed, but no matter how crooked; this is not allowed.''

Leeuwarder weed oil helmsman must report to the police: 'Bring on that process'
Read more

Still, it doesn't seem like he has much to fear. The test labs are virtually tolerated. Several have already been opened elsewhere in the country for the Highlab in Leeuwarden. And none of those labs had a police force on the doorstep immediately afterwards. The state of affairs seems to fit in exactly with the Dutch back door policy whereby coffee shop owners are allowed to sell weed, but are not allowed to buy it. "We have often seen that judges are tired of condemning this," says Schafrat of the Platform Cannabis Companies.

Is there going to be a change? The national weed experiment is in the pipeline where weed cultivation is regulated. In the advisory report states that an independent quality control and analysis of cannabis should be performed.

Beintema takes far too long to get there. And so he will get to work. At the medicinal Social Club, this went so far without problems with the judicial authorities. Since the beginning, Beintema has hoped for a process: "Precisely to demonstrate and discuss what is wrong with the current backdoor policy."

XTC use should never be normal